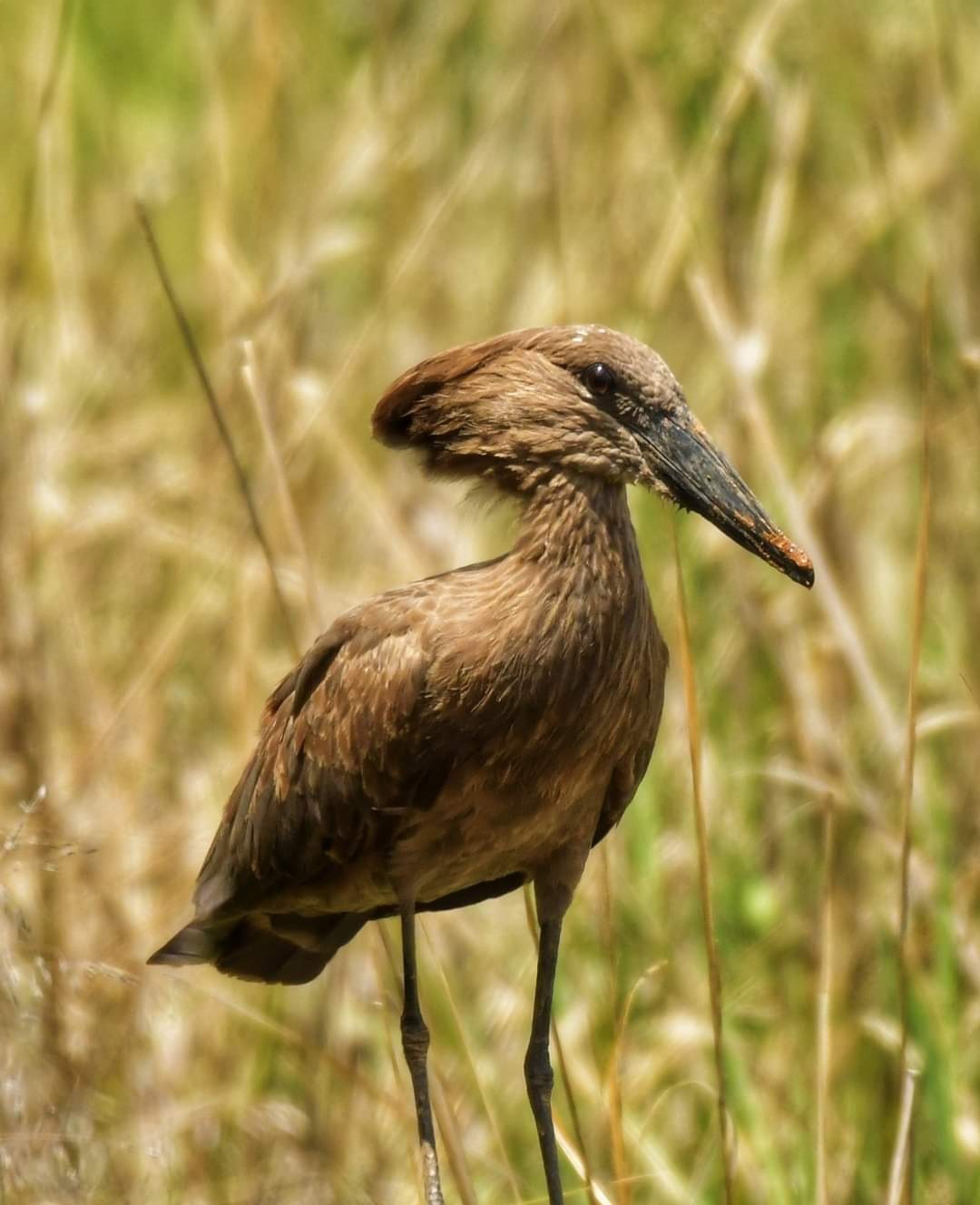 The bush has burst into hues of vibrant greens and floral carpeted areas, which were bare only a few months ago, a tribute to the unrivalled power of rain. This time of year makes us so much more aware and grateful for the abundance which Mother Nature has provided us this season

Cheetah are Mother Nature’s precision, high-performance machines, designed to do one job and do it with incredible skill and effectiveness. They can accelerate faster than a Ferrari, tearing up the ground from 0-75 km/h in just 3 seconds, and comes with a self-grown paint-job that would make the fanciest muscle car blush with envy.

Cheetah are physically designed for speed! From nose to tail they are aerodynamically designed to achieve maximum acceleration in the shortest time. Their tails, used as a rudder when running, are almost as long as their bodies. In full hunting mode, it is used to balance the animal when it executes tight turns at high speed. Although cheetahs are generally regarded as solitary creatures, the males occasionally form coalitions that will allow them to hunt larger prey species. These groups consist of between two and four animals, usually siblings, but they can also be non-related animals that band together to be more effective hunters.

You would think that with all the expended energy, they would have to drink regularly, but they are the least water-dependent of the cats, getting most of their moisture from the prey they eat. Unlike the roar of the lion or the sawing grunt of the leopard, cheetahs communicate through almost bird-like chirps and purrs. They are the only cat out of the big cats that actually purr. The distinctive dark lines running on either side of the nose are used to absorb light in order to cut-out the visible glare whilst hunting during the day. As a solitary animal, a cheetah mom gets no help from either the father of the cubs or other females in the raising and training of her cubs. The cubs are born with a grey ruff along their backs that mimics the colouration of a Honey Badger, a small animal with the attitude of an elephant! Enough about cheetahs for now. 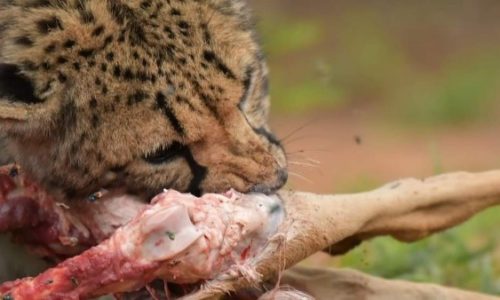 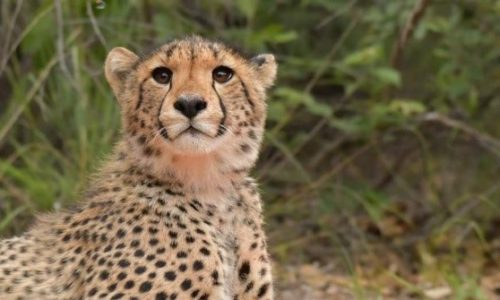 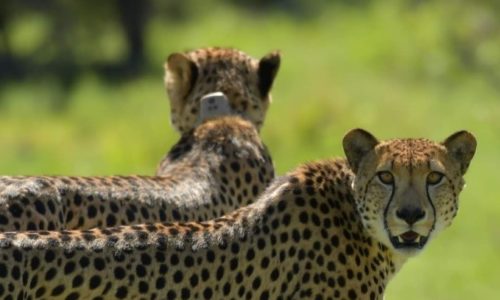 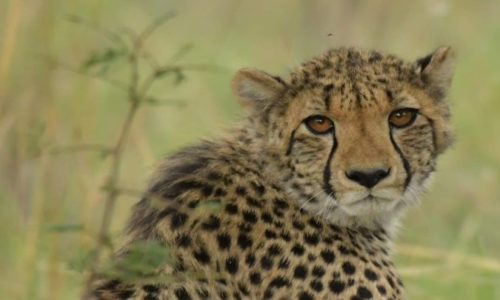 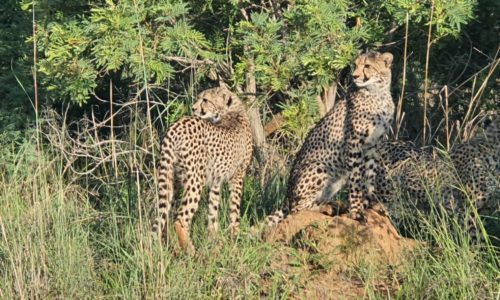 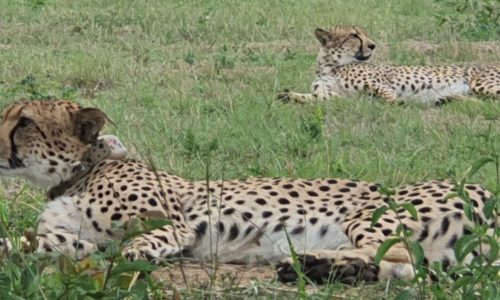 Lions usually hunt at night. Their prey includes antelope, buffalo, zebra, eland, wildebeest and even giraffe. At Mabula the lions prefer hunting zebra and wildebeest, but they have been known to hunt smaller prey like mice, birds, hares, lizards, and tortoises. After a successful hunt the pride will share the meal, however, there is a pecking order, with the adult males taking first claim, followed by the lionesses, and finally the cubs if there are any.

Lions have a fast-working digestive system, which allow them to gorge themselves and then go for seconds shortly after. If available, they will drink water every day. But they can go 4-5 days without drinking by obtaining moisture from the stomach contents of their prey. Spending 16-20 hours of the day sleeping or resting, lions are the laziest of the big cats. They can be found lying on their backs with their feet up or taking a snooze up in a tree. While lazing around, they are very affectionate towards one another, rubbing heads and grooming.

Female lions are the primary hunters of the group. They are smaller and more agile than males. But since their prey is still generally faster than them, they use teamwork to bring an animal down. Fanning out, they form a semicircle, with the smaller, weaker lionesses herding the prey towards the centre. Then the stronger females knock the animal down and make the kill. 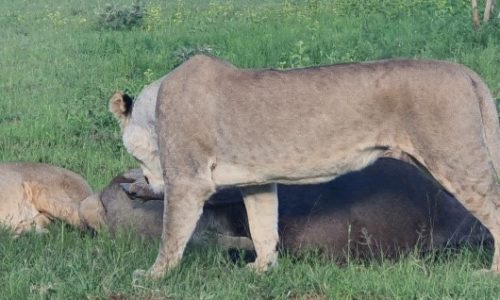 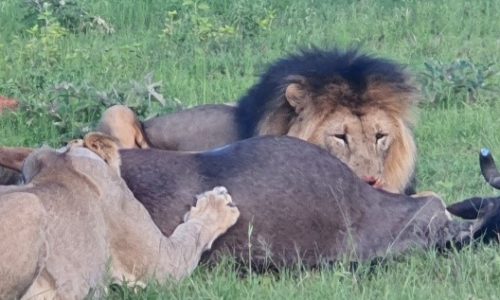 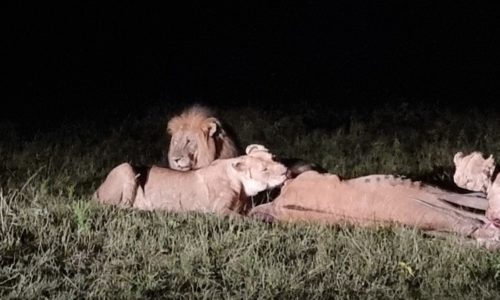 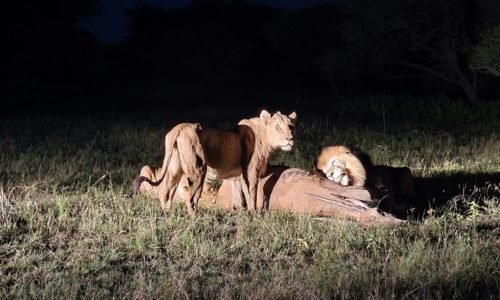 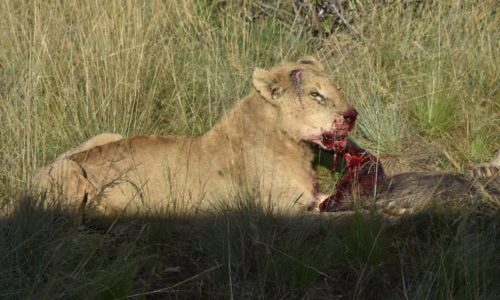 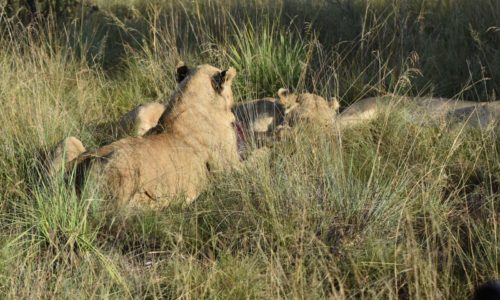 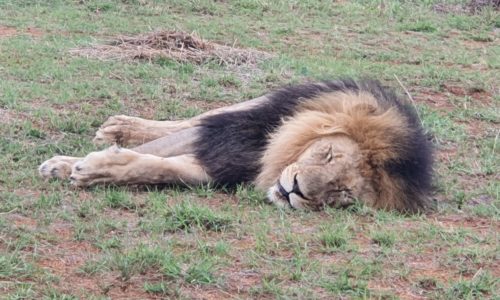 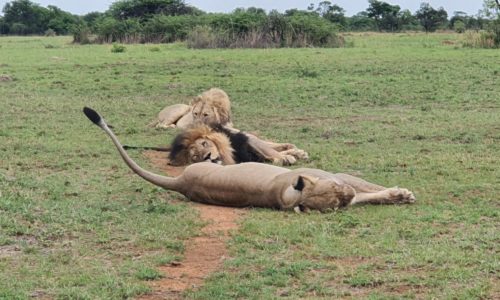 The world’s largest land mammal is an impressive creature. Its sheer size and accompanying strength will hold anyone in awe, yet as with so many creatures, it is the finer details that are often the most interesting.

Elephant do not shy away from eating thorn trees. Many species they relish have long, wickedly sharp thorns, and in order to reach the choicest bits of the tree, an elephant might have to put its head right in amongst the foliage, running the very real risk of getting jabbed in the eye by said thorns. Sensitive eyelashes – just like ours – let the creature know when something is hovering close to its eye and will bring about the blink response or cause the elephant to move its head away. Look at an elephant and it looks wrinkly, like its skin was a couple of sizes too big. The older they are; the more wrinkled they look, don’t we all. If you look really closely (inadvisable, unless you’re using binoculars), you’ll discover that the skin is made up of way more convolutions, cracks and crevices than you imagined. It’s all about temperature control as they don’t have sweat glands like we do.

They have a few, but these are all situated on their feet, instead they stay cool by spraying themselves with mud or water, or even completely immersing themselves in either. The cracked skin results in a far slower evaporation rate than smooth skin would, with up to 10% more moisture being retained. On a hot day at Mabula, a completely wet elephant would be dry in about an hour if its skin was smooth, which wouldn’t help it much. The smaller cracks form through the growth of the skin itself; the outermost layer of skin gets thicker and bends as new layers form underneath, until the brittle outer material fractures. If this didn’t happen elephants would shed their skin much like we do, which also wouldn’t help much as they’d get pretty hot, pretty quickly. 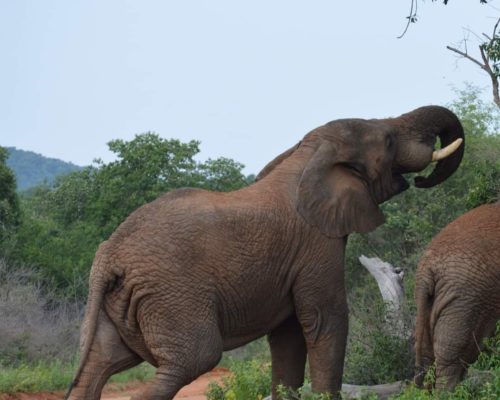 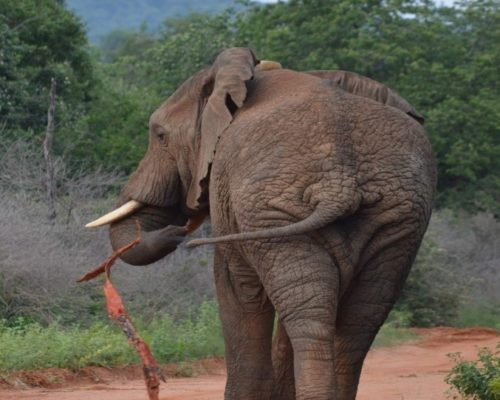 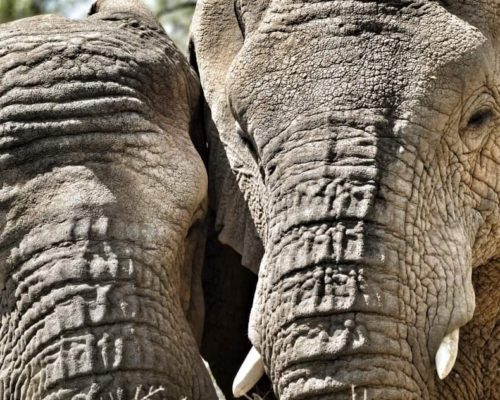 Whilst animal behaviour is usually what draws people to wildlife areas, knowing how their bodies work and are actually put together helps enormously when it comes to interpreting exactly what some animals are doing. And that’s as true for a bullfrog or a Wahlberg’s eagle as it is for the largest land mammal on earth. Watching a dazzle of zebra or a journey of giraffe, which is quite spectacular on its own, there is also often something else interesting going on which tends to go unnoticed by us observers. If you look carefully you’ll notice at any given time there is usually a little bird, or group of birds, sitting on the animals. This bird is the oxpecker. Often laughed at and thought to be catching a free ride, these birds are doing so much more than just this.

What the bird is actually doing is cleaning the animal of the parasites. Most times their main targets are the ticks that have made their way onto the hides of the unsuspecting animal. One may say that the bird has no clue how much it is helping the giraffe or zebra and that it is merely just feeding itself but nevertheless it is helping to perform some very important functions. By pulling the parasites off they are helping to clean the animal, often in places, they can’t reach themselves and more than likely preventing them from picking up diseases that these ticks may carry. A wonderful example of animals working together and essentially strengthening the survival of the system as a whole. When you tug at a single thing in the universe, you find it is attached to everything else.

That is all for this month, until next month again…. Enjoy reading.

From Isaiah Banda & The Mabula Family. 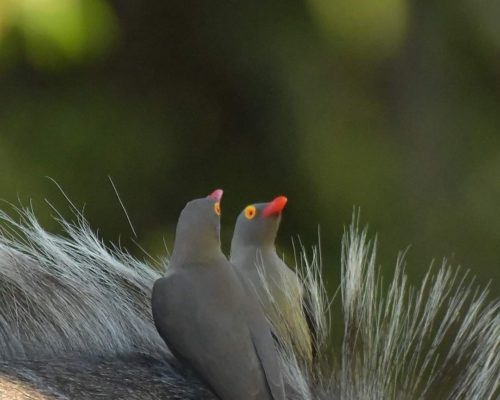 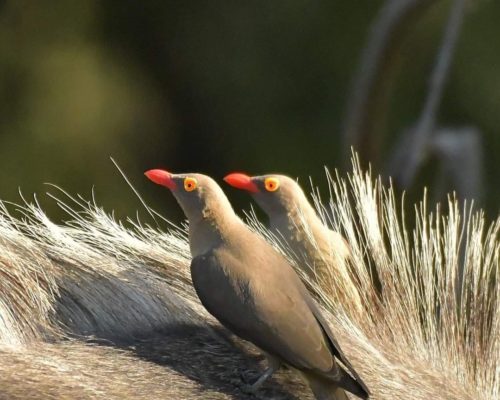