Reserve Manager Kobus Havemann has a dream job taking care of the Mabula Private Game Reserve daily. This sounds like an easy task but frankly, every day brings the unexpected. From rescuing wildlife that has got into trouble to ensuring that the habitat is well preserved Kobus is on duty 24/7.

He is a Nature Conservationist with a background in wildlife management and eco-tourism. Explaining that he started his career at the National Zoological Gardens in Pretoria and has since worked as a nature conservation officer, safari guide, operations manager, and game warden in different areas of Southern Africa, we quickly realise that this man is eminently qualified for the task of ensuring that Mabula Private Game Reserve is recognised in conservation circles as a valuable reserve with a great deal to add to species preservation. A registered professional natural scientist specializing in the field of ecological science, he is involved in the behavioural ecology of White Rhino, the EWF Cheetah Metapopulation Project which aims to ensure long term viability of cheetahs in fenced reserves and demographic integrity of the metapopulation. “It’s great to be a part of such an important project which encompasses more than 350 cheetahs across 54 Game Reserves,” says Kobus whilst relaxing over an early morning coffee. It is hard work ensuring that Mabula Private Game Reserve offers its discerning guests a great diversity of wildlife. From elusive leopard which has been part of a monitoring study to improve sightings in the past year to the success of brown hyena and Gemsbok on the reserve. A well-established safari experience, which offers guests not only Big 5 but also large and small antelope, hippo, crocodile and even Ostrich which ensures that Mabula Game Lodge maintains good guest numbers which further improves funding to the conservation side of the reserve. Kobus has a fantastic team of dedicated Rangers and Ecologists at his disposal for the enormously rewarding work of running a Game Reserve. Non more important than our very own double Lilizela Award winner Isaiah Banda who manages the adjoining Madjuma Reserve. Having the added bonus of areas of the reserve that do not have all the predators ensures the vast numbers of prey species can thrive. “Cat sightings have rocketed in the past year with the birth of several cubs and their eventual habituation to vehicles which ensures more guests leave with their expectations being met,” says Isaiah with his gentle smile. One can easily see how passionate he is about the work being done on Mabula Private Game Reserve.

This is no doubt a dream team that one simply knows will go the extra mile to ensure the success of the projects and longevity of this important conservation area so close to Gauteng. “Really, it’s the closest Private Reserve to Johannesburg with a true conscience for conservation,” says Kobus with a grin. 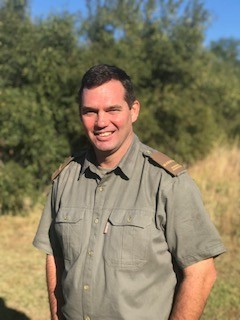 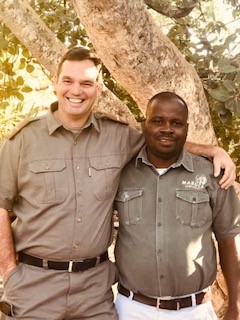 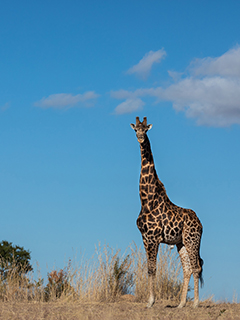 A giraffe at Mabula Game Lodge