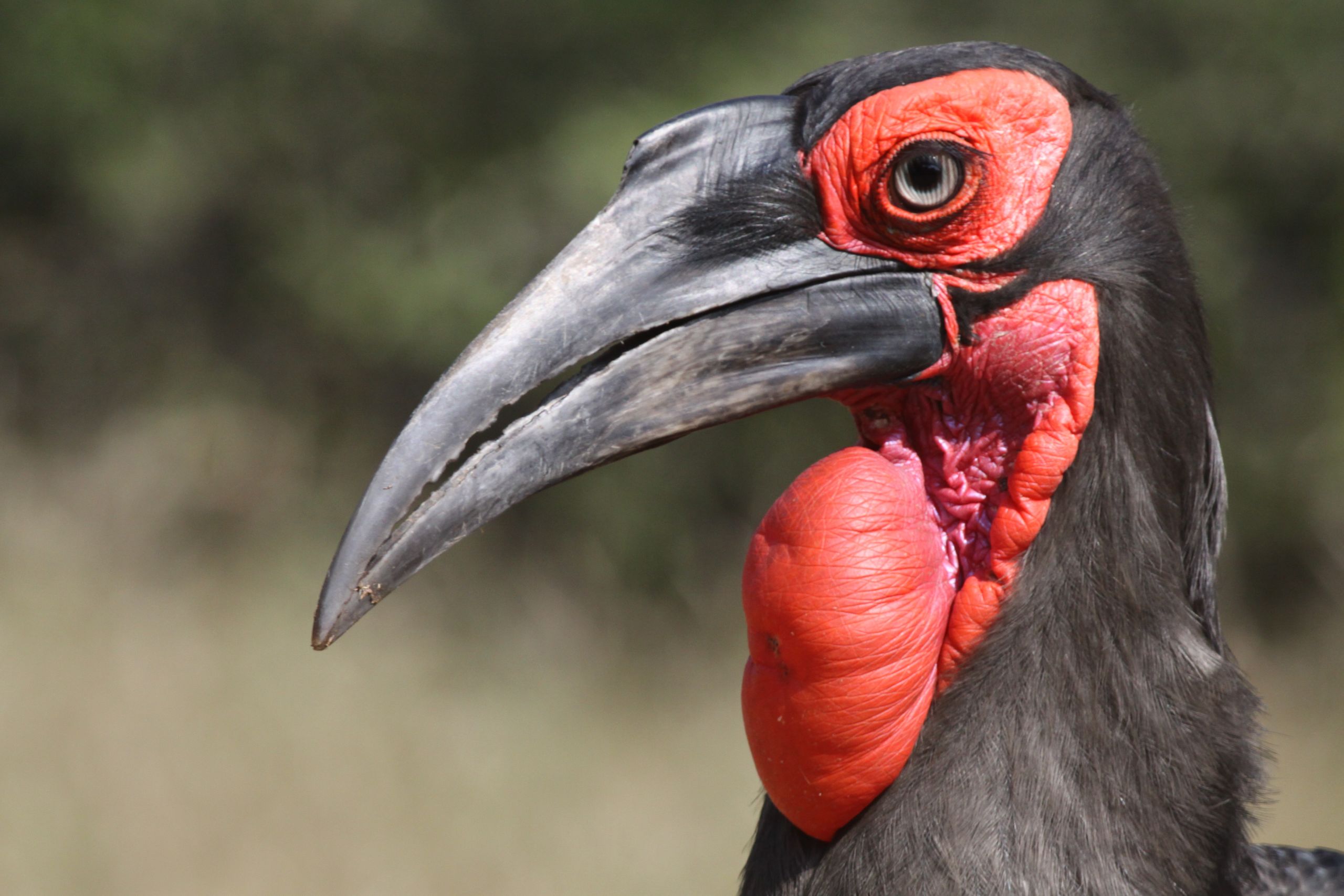 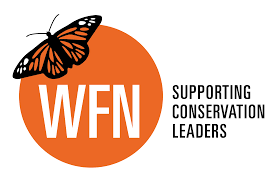 !!!Ground-hornbills have made it to the finals for the Whitley Fund for Nature Awards 2021!!!
Register here if you would like to watch the award ceremony on May 12th and 7pm BST. Fingers and toes crossed 🙂

If we do win this award then it is on behalf of all the dedicated people who have worked so hard to understand and find ways to keep this species safe over the last 21 years – YES – we are 21 this year. 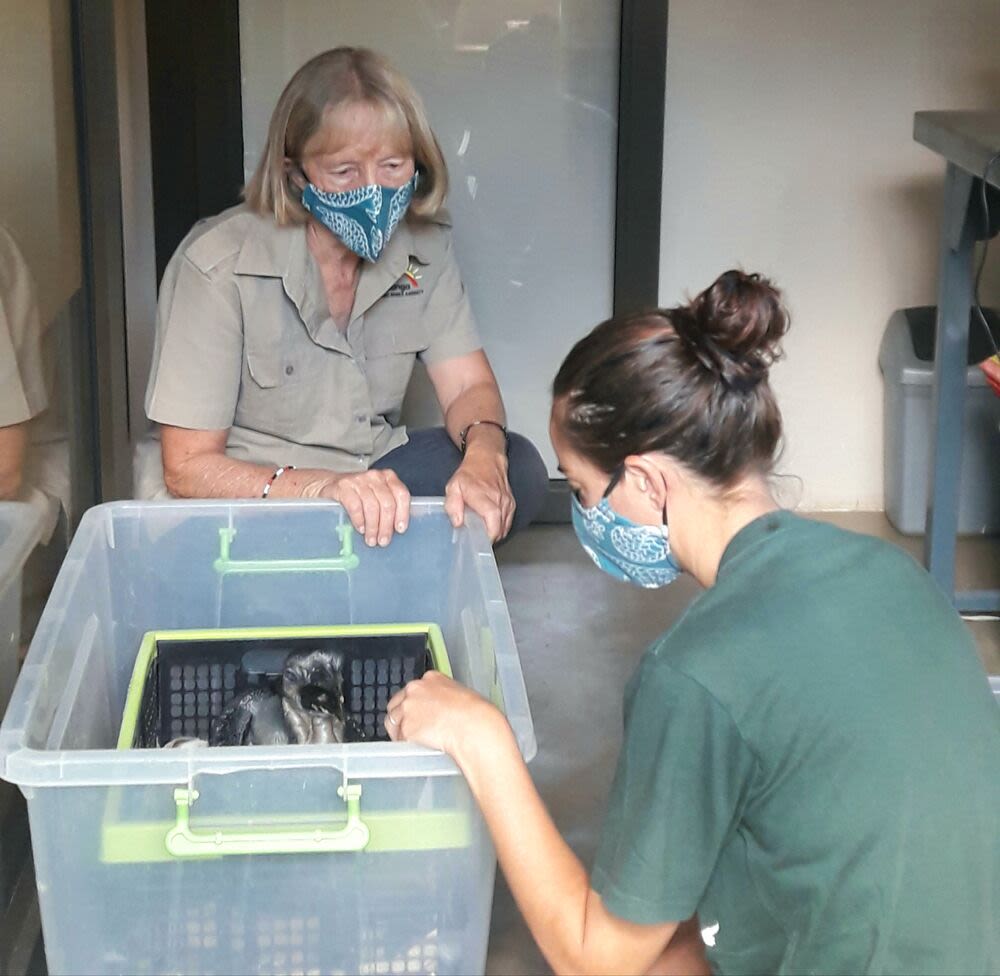 An amazing season by the rearing team at the Baobab Conservation Rearing Centre, led by Delecia Gunn, of Mpumalanga Tourism and Parks Agency, we have three young males and a young female fledged and ready to become part of the national population restoration programme.

75% of the reintroduced groups with a breeding-age female laid fertile eggs. We were also able to harvest a second-hatched chick from one of them to join the artificially-reared chicks. 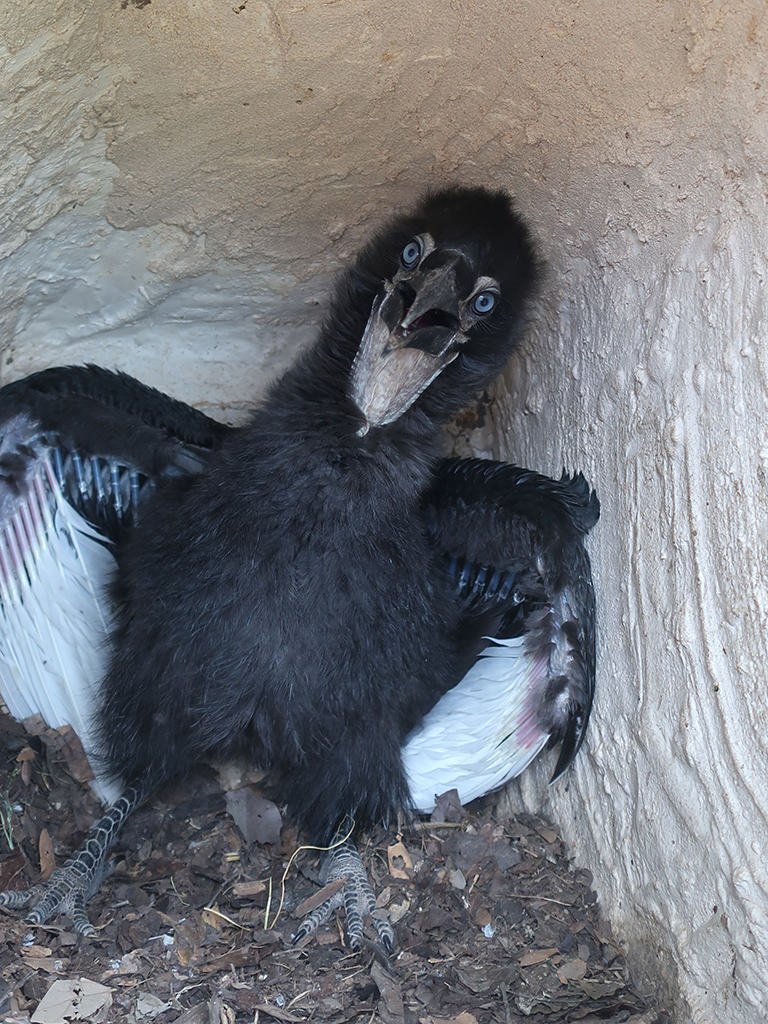 We ringed this little fellow (and he is a fellow as his DNA sexing results are back in) and he has fledged successfully and is now safely out and about in the big wide world!

It was a glorious few weeks doing the final nest productivity checks. The bush was lusher and greener than we have seen it for years. The rivers had flowed but sadly the rain may have been too much! The nest productivity was lower than usual. And we found that some of the nests had some little visitors – several predations took place too. And we learnt new things – as always – our field ranger in Kruger showing us this beautiful Cleome spp. flower looks like an elephant, with two yellow ears and two skinny tusks. It is always a pleasure working with the SANParks teams. 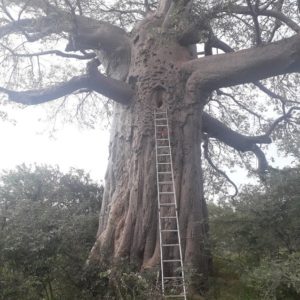 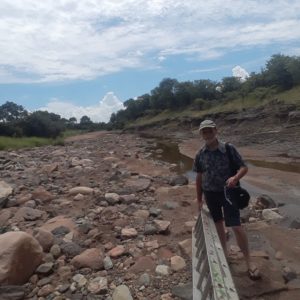 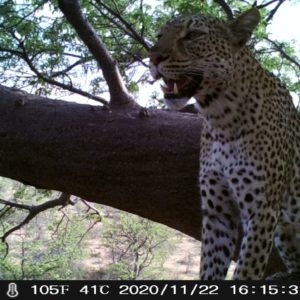 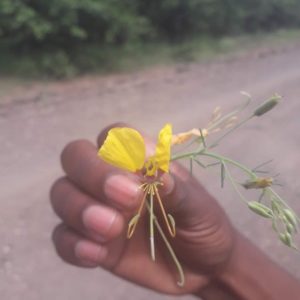 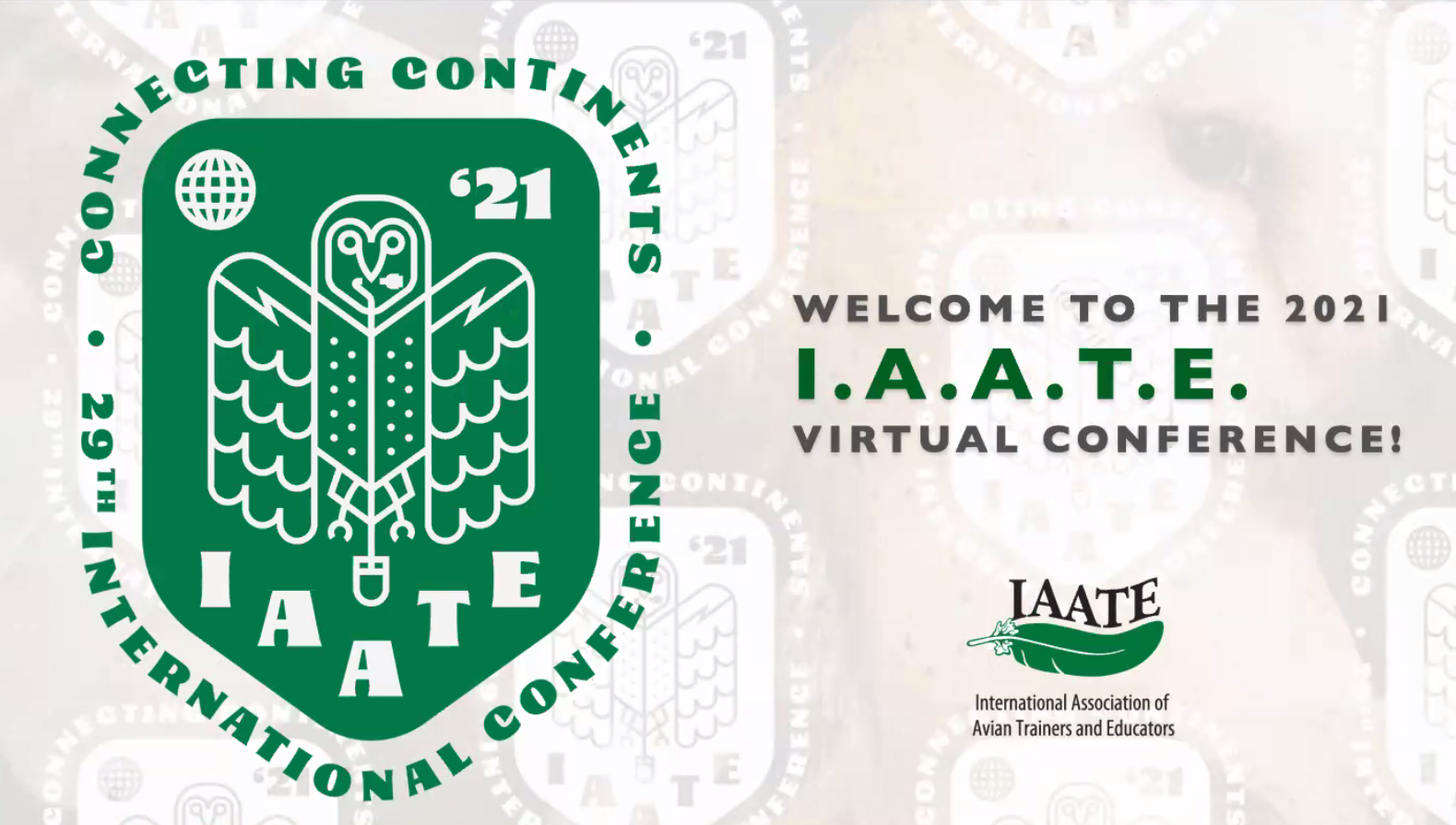 We were very privileged to be able to present our work at the IAATE Conference where we were presented with $5000 towards our work – THANK YOU!

We were also invited to share our work in the Maryland Zoo Virtual Field Talks – a really cool way of connecting their staff and visitors with their conservation partners on the ground.

We are also thrilled to have another publication out – a case study in Global Conservation Translocation Perspectives: 2021. 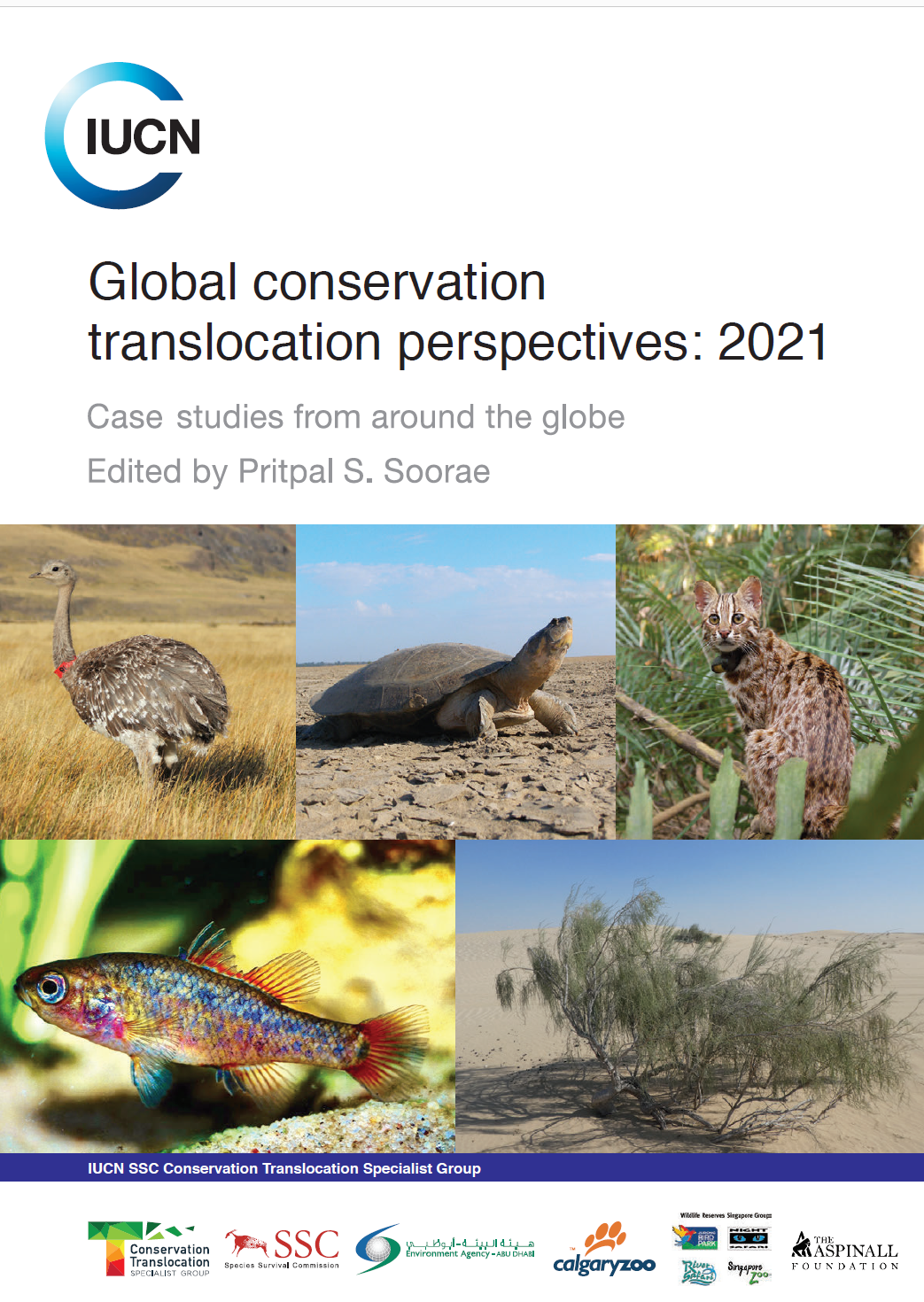 How to manage range expansion of the Southern Ground-hornbill population in the Lowveld, beyond the borders of our protected areas?

The Kruger National Park is the largest population in South Africa, safe-guarding about 180 breeding groups. However, we need to be able to support the young dispersals looking for new territories as they will have to wait potentially for decades to replace one of the current alpha’s. 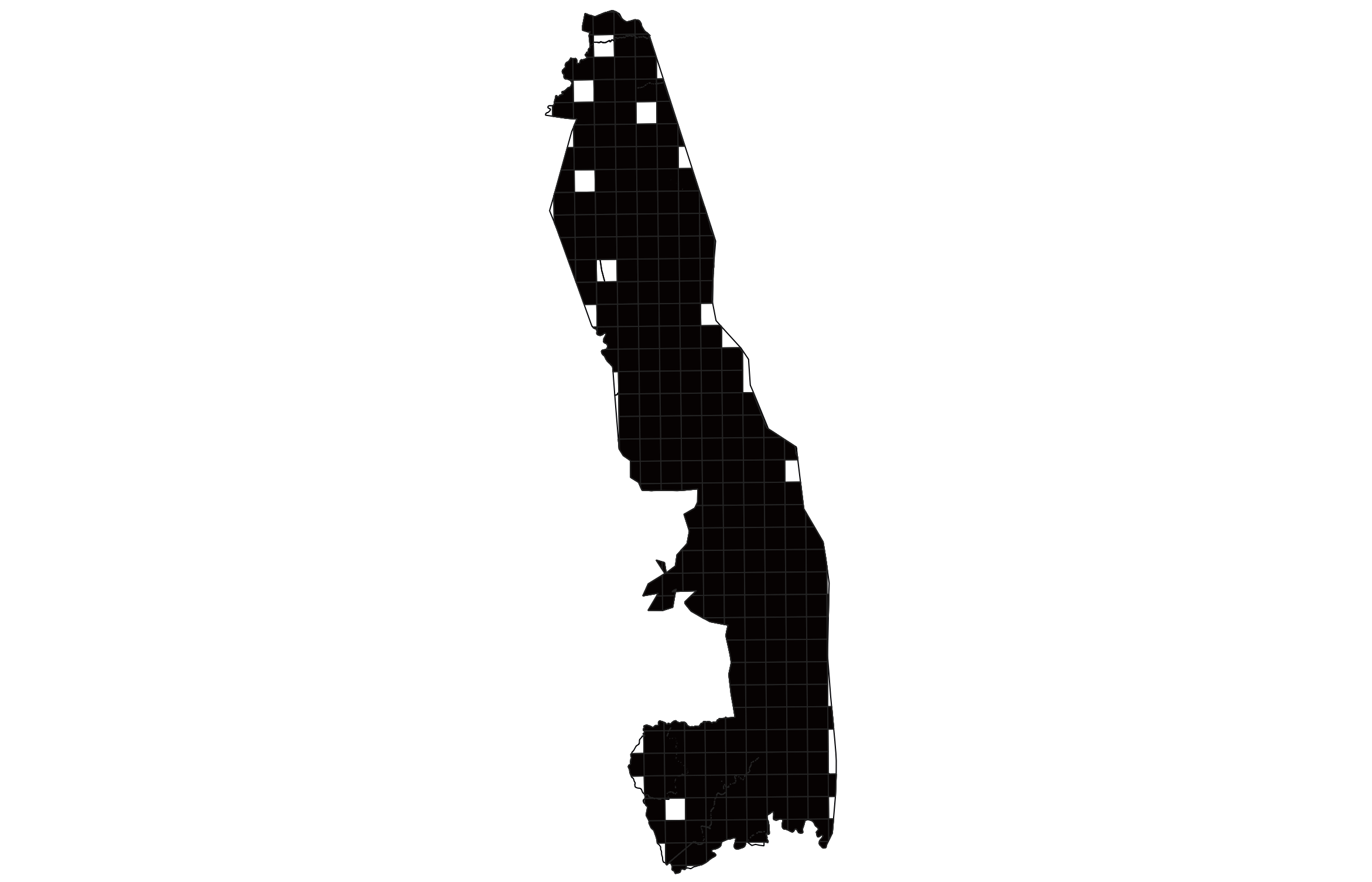 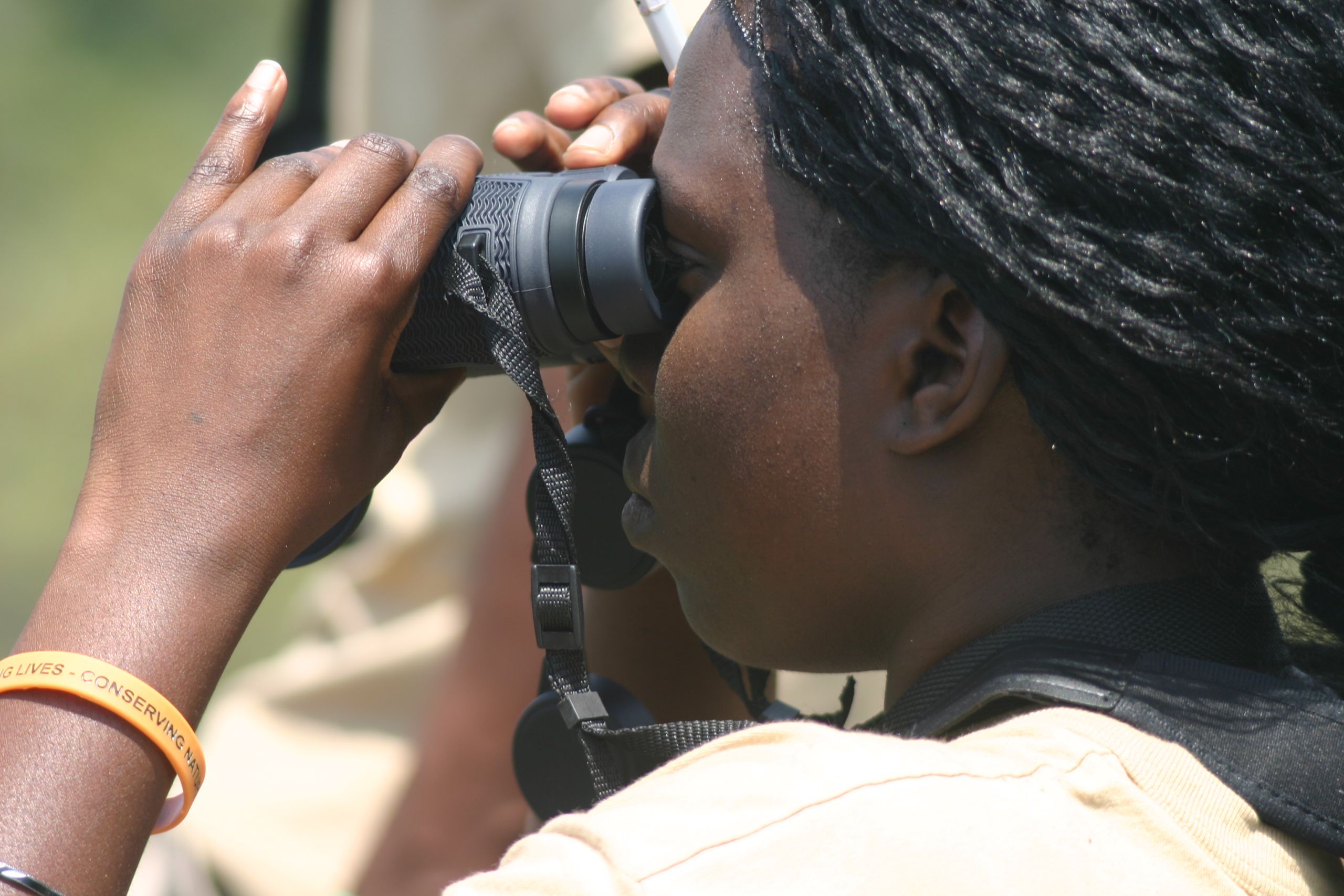 Patience Shito will lead this research as part of her MSc with the Univ. of the Witwatersrand. She will be supervised by Prof Neville Pillay, Dr Louise Swemmer and the MGHP academic team.

Her work is currently sponsored by Rufford Small Grants and Copenhagen Zoo.

We are thrilled to be able to continue to grow strong conservation capacity for South Africa. These two students have joined our team for 10 months to gain real-world conservation experience, and also to bring their own unique skillsets to ground-hornbill conservation. More girl power for us! 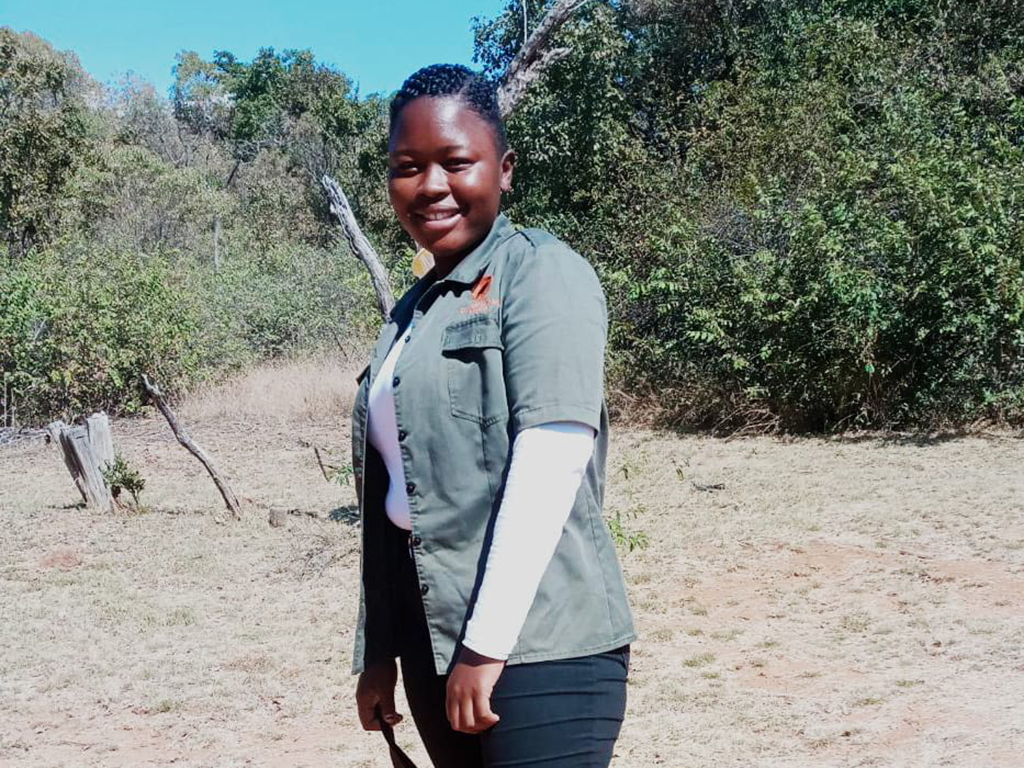 ‘Growing up in one of the Kruger National Park neighbouring communities, have always wondered how it’s like to be exposed to such an environment. Even though I had little information on why reserves or national parks have to conserve these species I have always been interested in bush life. I realized that there’s more to conserving and managing natural resources than just as tourist attractions. I am highly honoured to be part of the Mabula Ground Hornbill Project, as this is a charismatic species, and also to broaden my knowledge. ‘ 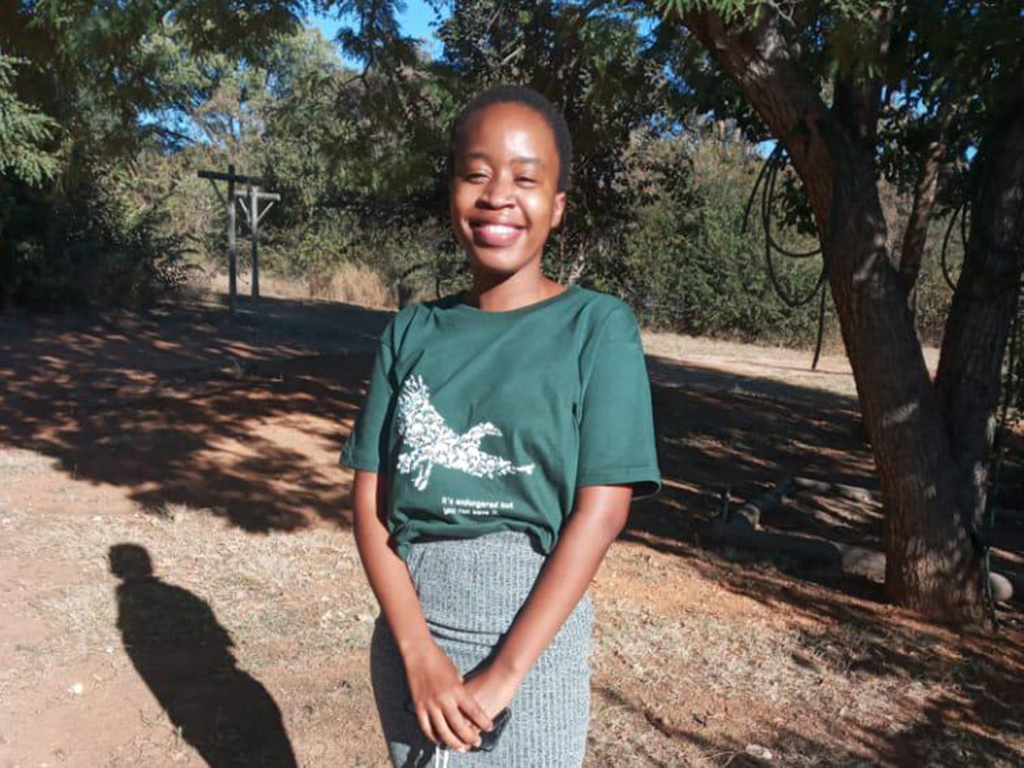 ‘Growing up in the rural area of Mtubatuba in KwaZulu-Natal is the one thing that exposed me to the bush. Every evening I would accompany my older brother to fetch the cows from the veld just to get more opportunity to explore the bushes and run around. That made me fall in love with nature and want to know more about it. I am thrilled to work for the ground-hornbill project because saving the planet and its species is where my heart lies .’

A PROPER DEATH BY A PROPER PREDATOR

Meet Storm. This male was the sole survivor of his group based near Tzaneen, the rest sadly succumbed to the illegal use of rat poison, for which the brand name at the time was ‘Storm’. He was successfully rehabilitated by Brian Jones and his team at Moholoholo Animal Rehabilitation Centre and was released onto Mabula in 2000. He has since taught bush-skills to a multitude of young hand-reared juveniles – and has been one of the key drivers to the success of the reintroductions,

The team was devastated to be called to Main Dam as one of the rangers had witnessed a crocodile seize a ground-hornbill. We raced there, hoping it was a replaceable juvenile that had been caught, but alas, it was Storm. Just his white primaries were left, floating in the shallows. Luckily Storm’s son, now mature, remains to hold down his territory, and his legacy. 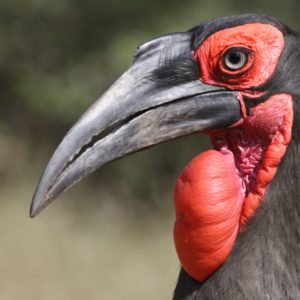 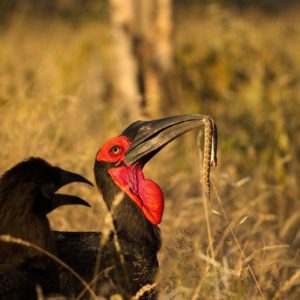 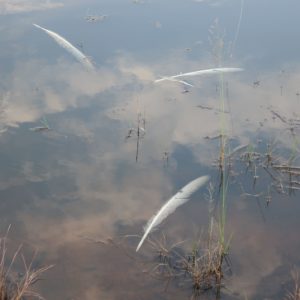 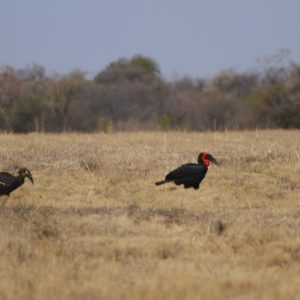 In the capable hands of Dr Jarryd Alexander we are growing the citizen scientist network and gaining invaluable insights into where we need to direct our conservation efforts.

We now have over 40 Champion-led groups now, consisting of over 400 contributors, and we receive in excess of 400 sightings a month. In ground-hornbill terms this a wealth of vital distribution data.

The national database now holds over 11 000 localities, and in the first four months of this year, we already have resighting in 48% of the known occupied pentads. 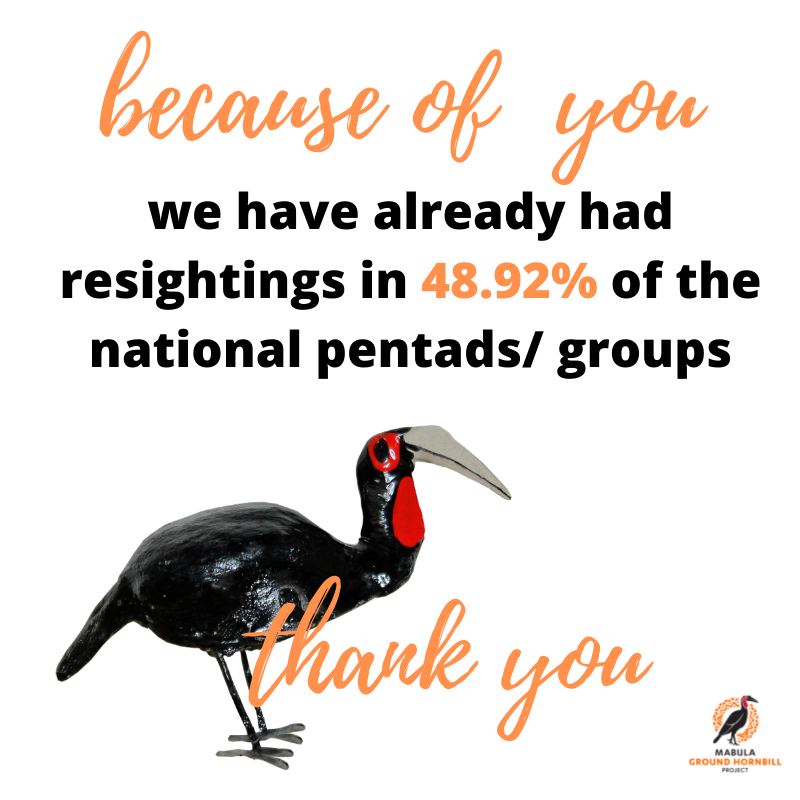 ASSESSING THE IMPACTS OF WIND FARMS

South Africa desperately needs to move to a more sustainable energy solution than its current reliance on coal and firewood. Yet these sustainable solutions are not without risk. Wind Energy Facilities (WEF) are springing up around the Eastern Cape, now for the first time, with in the range of the Southern Ground-hornbill. We are working hard to understand what the potential threats are and how they can be mitigated for.

Here a pair of ground-hornbills pace some of the newly planted fields that will soon be in the shadow of the wind turbines.

There are multiple other large birds in the area too – cranes, storks, secretary birds and vultures.

As the area is predominantly under cattle grazing, the habitat is ideal for ground-hornbills. We are looking at several options including placement of turbines, alternative nest sites and an overall improvement in the types of assessments done prior to construction. 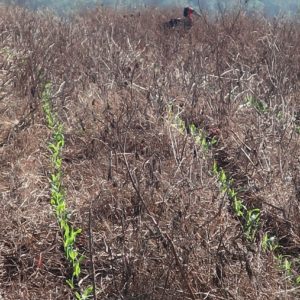 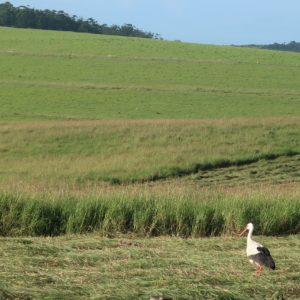 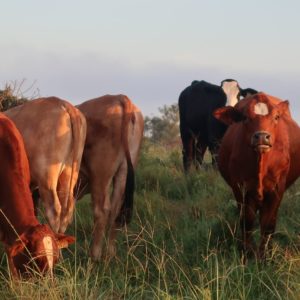 # thunderbirdthursday has reached over 2 million (2 227 794 to be precise 🙂 ) people around the world – thank you to everyone who shares their ground-hornbill photos and care every Thursday under this hashtag. Send us your photos if you would like to be our weekly thunderbird star.

If you would prefer not to receive our newsletters please just drop us a line here.

If you like our newsletters please feel free to share with friends and family – the more people who love ground-hornbills the better the chances of finding a safe space in our world.